”My one purpose in life is to help people find a personal relationship with God, which, I believe, comes through knowing Christ”.

Humble Beginnings
Born November 7, 1918, four days before the Armistice ended World War I, Dr. Graham was reared on a dairy farm in Charlotte, N.C. Growing up during the Depression, he learned the value of hard work on the family farm, but he also found time to spend many hours in the hayloft reading books on a wide variety of subjects.

In the fall of 1934, at age 16, Billy made a personal commitment to Christ through the ministry of Mordecai Ham, a traveling evangelist, who visited Charlotte for a series of revival meetings.

Ordained in 1939 by a church in the Southern Baptist Convention, Dr. Graham received a solid foundation in the Scriptures at Florida Bible Institute (now Trinity College in Florida). In 1943 he graduated from Wheaton College in Illinois and married fellow student Ruth McCue Bell, daughter of a missionary surgeon, who spent the first 17 years of her life in China.

The Early Years
After graduating from college, Dr. Graham joined Youth for Christ, an organization founded for ministry to youth and servicemen during World War II. He preached throughout the United States and in Europe in the immediate post-war era, emerging as a rising young evangelist.

The Los Angeles Crusade in 1949 launched him into international prominence. Scheduled for three weeks, the meetings were extended to more than eight weeks, with overflow crowds filling a tent erected downtown each night.

Many of his subsequent early Crusades were similarly extended, including one in London which lasted 12 weeks, and a New York City Crusade in Madison Square Garden in 1957 which ran nightly for 16 weeks.

Today, at 85 years old, Billy Graham and his ministry are known around the globe. He has preached in remote African villages and in the heart of New York City, and those to whom he has ministered have ranged from heads of state to the simple-living bushmen of Australia and the wandering tribes of Africa and the Middle East. Since 1977, he has been accorded the opportunity to conduct preaching Crusades in virtually every country of the former Eastern bloc, including the former Soviet Union.

He founded the Billy Graham Evangelistic Association in 1950, which headquarters in Minneapolis, Minnesota. He conducts his ministry through BGEA, including the weekly &ldquotHour of Decision” radio program broadcast around the world on Sundays for over 50 years; Crusade television specials that are regularly broadcast in prime time in almost every market in the U.S. and Canada approximately six times annually; a newspaper column, &ldquotMy Answer&rdquot, which is carried by newspapers across the country with a combined circulation of more than five million readers; "Decision" magazine, the official publication of the Association, has a circulation of 1.4 million and is available in English and German versions, with special editions available in Braille and on cassette tape for the visually impaired.

Publications
Dr. Graham has written 25 books, many of which have become top sellers. His autobiography, “Just As I Am”, published in 1997, achieved a “triple crown”, appearing simultaneously on the three top best-seller lists in one week. Of his other books, “Approaching Hoofbeats: The Four Horsemen of the Apocalypse” (1983) was listed for several weeks on The New York Times best-seller list; “How to Be Born Again” (1977) had the largest first printing in publishing history with 800,000 copies; “Angels: God's Secret Agents” (1975) sold one million copies within 90 days; and “The Jesus Generation” (1971) sold 200,000 copies in the first two weeks.

Awards and Honors
Dr. Graham's counsel has been sought by presidents, and his appeal in both the secular and religious arenas is evidenced by the wide range of groups that have honored him, including numerous honorary doctorates from many institutions in the United States and abroad. Recognitions include the Congressional Gold Medal; the Speaker of the Year Award; the Templeton Foundation Prize for Progress in Religion; and the Ronald Reagan Presidential Foundation Freedom Award for contributions to the cause of freedom. He has received the Big Brother Award for his work on behalf of the welfare of children and been cited by the George Washington Carver Memorial Institute for his contributions to race relations. He has also been recognized by the Anti-Defamation League of the B'nai B'rith and the National Conference of Christians and Jews for his efforts to foster a better understanding among all faiths. In December 2001 he was presented with an honorary knighthood, Honorary Knight Commander of the order of the British Empire (KBE), for his international contribution to civic and religious life over 60 years.

He and his wife, Ruth, have three daughters, two sons, 19 grandchildren and numerous great-grandchildren. The Grahams make their home in the mountains of North Carolina. 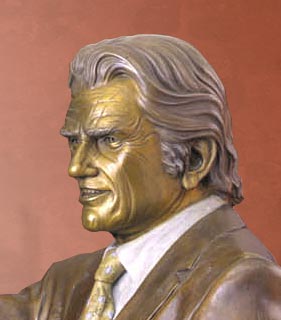 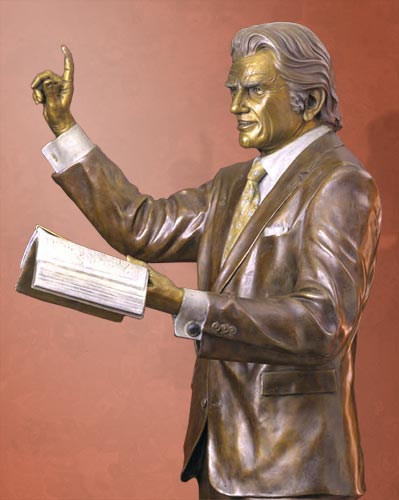