Way of the Warrior

The Way of the Warrior

"The Way of the Warrior" is a life-sized bronze double torso/head portrait, and a half life-sized maquette. It was originally sculpted to benefit the charitable service group Rancho Feliz, of which John has been a member for 29 years- (and the official Santa Claus to the orphanages for 19 years), shortly after it was founded by Gil Gillenwater - the man in this bronze. The child is a portrait of a little girl who was found near death, abandoned in a warehouse. She was brought to the Rancho Feliz orphanage, where she was saved and adopted into a good family. Since its founding, Rancho Feliz has performed numerous projects, from famine-relief work for the Tarahumara Indians in the Copper Canyon area of Mexico, to food distributions to the very poor of Agua Prieta. It has built other orphanages, rest homes, a 43 duplex housing development, a state-of-the-art day care center, computer-literacy centers, and many other projects. The aim is not to give charity, but rather to break the poverty cycle through education and opportunity.

It was John Soderberg's vision to capture in art the mutual exchange of energy that occurs through service work to those less fortunate than ourselves. In this age of evolving consciousness, the term "Warrior" may be re-defined. It takes more strength and courage to lift someone up than to knock them down, and a warrior displays that strength through responsibility and action- by looking out for those in genuine need who cannot help themselves. The modern day warrior specializes in construction rather than destruction.

The book in the warrior's right hand symbolizes the education and opportunity offered by service-workers to lift the child up and out of her inherited cycle and prison of hopelessness. The teddy bear symbolizes love and compassion. The design on the warrior's T-shirt is the Tibetan Knot of Eternity- an age-old symbol representing the inter-connectedness or inter-weaving of all humanity. The ever-watchful eyes on the back of his vest represent his awareness of the need of less fortunate others. The doll the child gives back to the warrior represents the spiritual rewards and growth we receive as we give.

In much of the places Rancho Feliz does its service, a poor child's doll is made by wrapping a ball of newspaper with a rag, then tying a string around its neck. John Soderberg added wings to the doll- symbolizing a broken-winged angel. The child gives back all she owns in this world. We receive with gratitude. 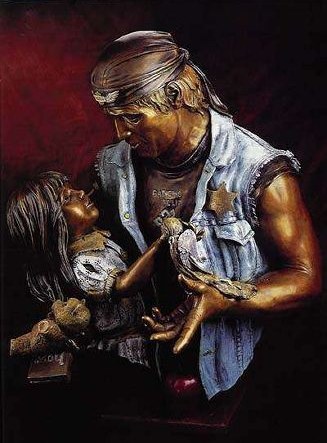 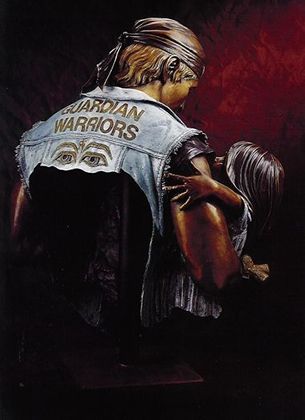