Few personalities in Native American history have been more widely portrayed in art and literature than Sacajawea, the Shoshoni Indian girl who accompanied Meriwether Lewis and William Clark on their expedition to the Pacific Coast in 1804-06.

Sacajawea, "Birdwoman" in English, was born about 1787 in the Snake River Country, today Southern Idaho. At fourteen she was captured by a Hidatsa war party, a hostile Minnetaree tribe from the east in North Dakota that had discovered their camp.

Suddenly there was shouting and gunshots in the Shoshoni camp, and to her horror Sacajawea saw men, women and children killed. They rounded up the women and girls who were left alive and took them away to be slaves for the Minnetaree women and to be sold to white Fur Traders and Trappers. Many weeks later, after a long and painstaking journey, they arrived at the Hidatsa Village of the Minnetarees.

For more than three years she worked hard for her captors, then one day learned that she had been sold to a French Canadian Fur Trader, Toussaint Charbonneau. He was nearly three times older than she, and had lived among the Minnetarees and Mandans for several years. Charbonneau was loud, lazy, a drunk, and a rough man.

At about the same time, President Thomas Jefferson had just completed the purchase of the Louisiana Territories from Napoleon Bonaparte and the French for 15 million dollars, which doubled the size of what was then the United States.

Meriwether Lewis, the President's private Secretary, a young man of only 30, with his friend Captain William

Clark, a 33-year-old who the Indians called "Red Headed Chief", were appointed by the President to explore the vast wilderness west of the Mississippi to the Pacific Ocean. No Caucasian had ever ventured into this area before.

They planned to travel up the Missouri River to the Rocky Mountains. The Captains hoped to find a river that would empty into the Pacific Ocean. On November third, 1804, the Lewis and Clark Expedition, called "The Corps of Discovery" had arrived in Hidatsa territory. They built "Fort Mandan" right across the river from the Minnetarees and the Mandan Villages. It was there that they engaged Toussaint Charbonneau as an interpreter and guide. Sacajawea had just given birth to her son on February 11th, 1805.

He was named Jean-Baptiste Charbonneau, but everybody called him "Pompey", which meant "Little Chief".

She went along with the party of explorers, carrying her papoose on her back, anxious to return to her own people, who ranged from Three Forks, Montana, westward to Idaho. It wasn't long before Sacajawea, and not her husband, became the guide to the Captains Lewis and Clark.

On April 7th, 1805, the Lewis and Clark Expedition left Fort Mandan, which was near what is today Bismarck in North Dakota. Sacajawea and her son are mentioned almost daily in the explorers' famous journals for her many heroic services. Pomp's presence on the trip was one of the few bright spots for many in the party as he helped keep their minds off of the problems and dangers that they lived with on a daily basis. The Captains and several of their men wrote in meticulous detail each day's events and discoveries. There was hunger, there was feasting. There was bitter cold in the "Shining Mountains" (known today as the Rocky Mountains), and there was pain.

Sacajawea gained the respect of all in the expedition. She was a quiet woman who never complained. Clad in doeskin, and the only woman on the team, Sacajawea was unafraid, walking hundreds of miles. She saved the men from starvation in the bitter cold winter and healed them with rare herbs and roots. She spoke several languages and served as an interpreter to the Captains. She sat in at Tribal council with the Chiefs negotiating for food and supplies, as no Indian woman had ever done.

When the party reached Three Forks, Montana, Sacajawea met her own people and learned that her brother, Cameahwait, had become Chief of the Shoshoni. She was able to obtain aid and ponies from her people, without which the party would not have been able to continue. On October 30, 1805 they arrived on the shores of the Pacific Ocean on the Columbia River. They had passed through many Indian territories on their journey westward including Sioux, Arikara, Shoshoni, Nez Perce, Blackfoot, Skillots, Flathead, Chinook and Clatsop.

One day they met a Chinook Chief at Fort Clatsop. He was wearing the most beautiful robe the Captains had ever seen. It was made entirely of the skins of white otter. The Captains wanted to trade something for it to give as a gift to the President, but Chief Comowool would not accept anything that the Captains were willing to trade. The Chief stared at the blue beaded belt worn by Sacajawea. She had received it many years earlier by her own mother. The Indians valued blue beads as the white man valued gold. He wanted the belt. Without hesitation, Sacajawea handed the Chief her belt in trade for the otter skin robe for the President. On March 23, 1806 the Captains gave Fort Clatsop and everything in it to Chief Comowool and started the long journey home. After two and a half years they arrived back at the Mandan Villages on August 14, 1806. Sacajawea had been with the Corps of Discovery for one and a half years. Charbonneau was paid five hundred dollars, good wages for the time. Sacajawea was paid nothing for her services; she was simply Charbonneau's wife.

William Clark was particularly fond of Sacajawea's son Pomp, and when the expedition ended he offered to take Pomp and raise him as his own. He felt the child was extremely intelligent and wished to educate and raise him in the "white world" where he would have every advantage. Sacajawea apparently felt that the advantages offered in that world would greatly benefit her son, and agreed to this arrangement. When the expedition returned to St. Louis, she allowed the two-year-old to go with Clark. Sacajawea went to live on the Upper Missouri River.

Pomp, or Baptiste as he was later called, remained in St. Louis and continued his education through 1820. Shortly after that he reunited with his mother and father and in 1823 he met Prince Paul of Wurttenburg, a young German explorer. The two young men became friends and Baptiste traveled to Europe with him and there spent several years continuing his education. Upon returning to America he could converse fluently in German, Spanish, French and English and spent the rest of his life exploring the western part of the United States. He joined several expeditions led by famous American explorers such as Jim Bridger and Kit Carson. He died in California in 1866.

Toussaint Charbonneau was last heard of in 1839 when he was about 80 years old and showed up at the Indian Affairs Offices in St. Louis asking the Superintendent for his back pay as interpreter for the Mandans.

Sacajawea remains a mystery. Most experts agree that on April 2, 1811, Sacajawea set out with Charbonneau on a Missouri River expedition. She later settled at a Fur Trading post, not far from where she joined the Lewis and Clark expedition nearly seven years before.

A Fur Trader reported her death on December 20, 1812 of a fever but in 1875 a missionary found an old woman among the Shoshoni who claimed to be Sacajawea (at this time she would have been nearly 100 years old). If this was the legendary Sacajawea, she died near Fort Washakie on April 9, 1884. We may never know for certain, but we do know that the country Sacajawea helped to explore will never forget this remarkable woman.

There have been more statues erected of this humble and quietly determined woman than any other in American history. Her example of courage and perseverance in the face of crushing adversity lives on to inspire us all. 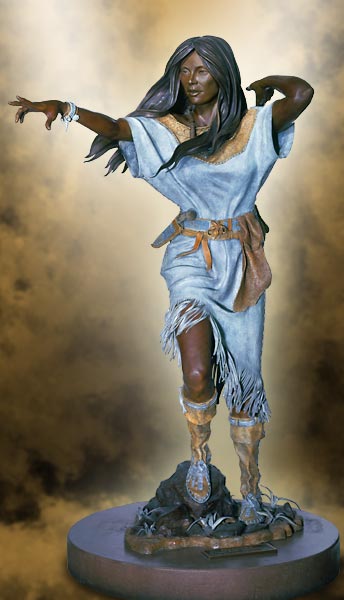 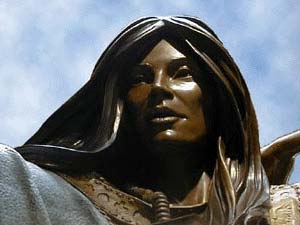 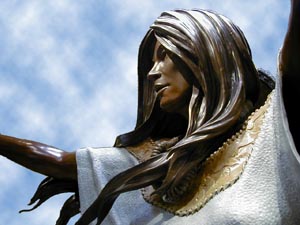 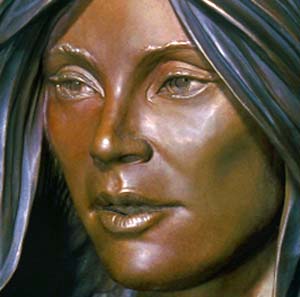 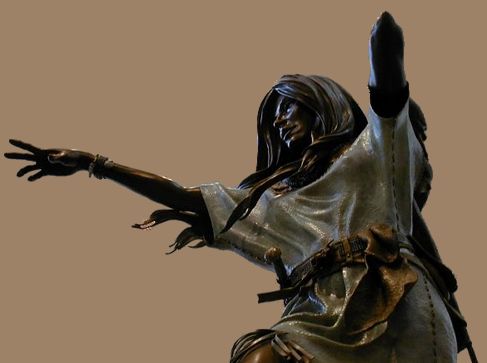 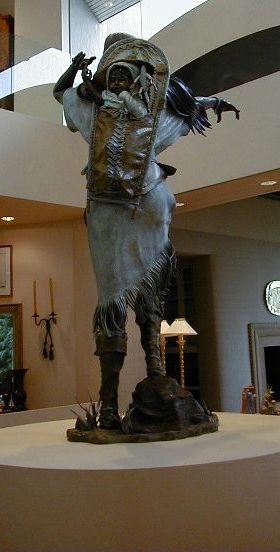 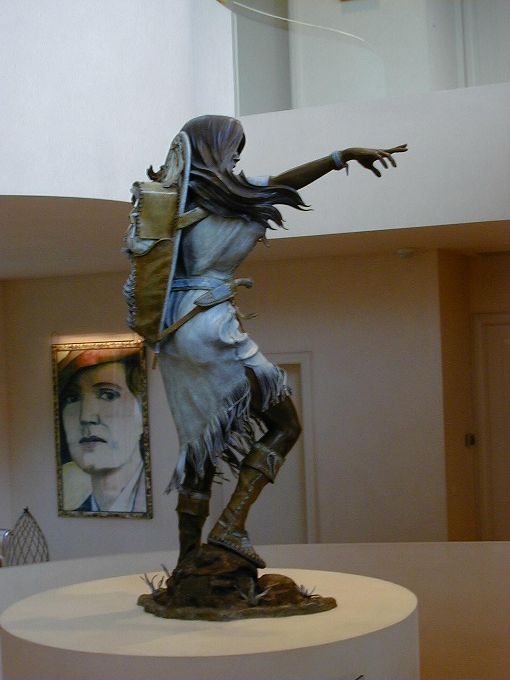 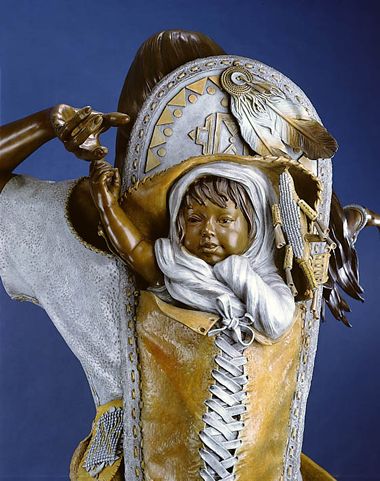 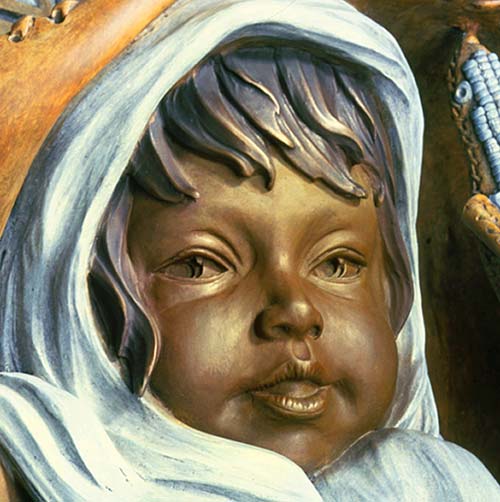 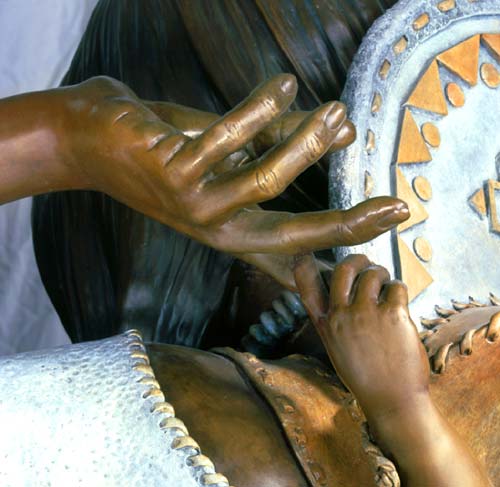