Athena, daughter of Zeus, sprang fully formed from her father's forehead. A figure of complex contrasts, she was Goddess of War, Wisdom, Art and Craft. She was skilled in militeristic strategy, and honored for her weaving and spinning. A mortal woman, Arachne, once boastfully challenged Athena to a spinning contest. After Athena won, she changed Arachne into a spider so she might practice spinning forever, and thus acquire humility.

Athena's name predates Greece, and we are not sure of its origin. She is often portayed with an owl on her shoulder, but the blind poet, Homer, described her as owl faced, and ancient Eastern Christianity describes her as a winged spirit.

John chose to sculpt her as a Shamanistic Shape Changer. In the midst of transistion from human form to owl, feathers are growing on her body, and her fingers are elongating and gesturing as the full moon reaches its zenith. 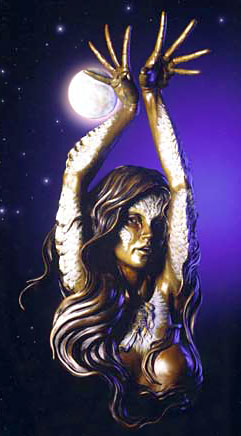