When my children were young we had 140 pets — birds and mammals from peacocks to monkeys and even a Servile Cat. I could write a book of animal stories. Just one of them: one of our family dogs was the ever playful and curious Tonka, a giant Neapolitan Mastiff. During a break from welding one day I heard hysterical squawking. Outside my metal shop was Gertrude, a scrawny little mother hen, furiously flying into Tonka's face and beating him with her wings while her chicks looked on uncertainly. Motionless, Tonka accepted the abuse. I figured Tonka had done something, so I yelled his name. He spun around and looked at me sheepishly, then opened his mouth and out jumped a little chick, which then ran to its mama.

Max, the serious minded older dog who is the subject of this sculpture, educated himself on all the likely places a sock might lurk. After a day spent performing his duties — of protecting his property against disrespectful or suspicious animal or human intruders — he would spend some of his leisure time pouncing and capturing a sock, then enticing the humans that belonged to him into a game of tug. This admirable canine quality of retaining a sense of playfulness, no matter how old, is a lesson we humans may benefit from. 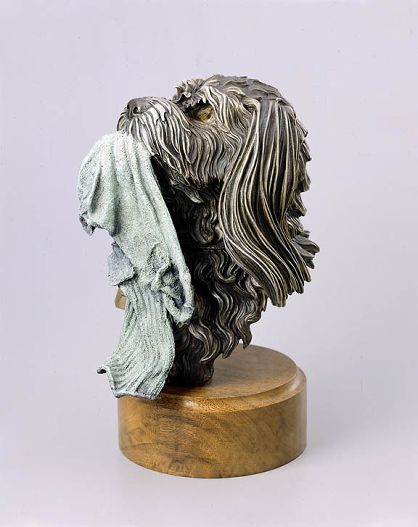