Keeper of the Gate

Keeper of the Gate

Many diverse cultures throughout the world and back through time have had legends of the Little People. Often benevolent, sometimes mischievous, they observe the doings of the Big People with interest, and flit back and forth between their world and ours.

In Celtic mythology, as well as in others, the important or powerful times or places were the Gates--those times or places that were "Between"--between night and day, land and sea, forest and glade, between the rational world and the other.

The transition between onestate of existence and another, or one place and another, was seen as a time of sensitive vulnerability, or of opportunity. Magic could happen during that time of delicate change when pragmatic existence sometimes seemed to stretch thin and become transparent, and logic itself seemed open to aesthetic interpretation.

The Keeper of the Gate was charged with the awesome responsibility of keeping the magical world pure. Ever vigilant, she guards against evil intent, working in concert with the natural world, both plant and animal, in the form of a pygmy owl and a mobile mushroom with feet.

Her baby, a symbol of perpetuity, sleeps cradled in a walnut shell as the Keeper of the Gate rises on her avian steed to face a suspected challenge to the integrity of her world. But, her human form and maternal state hint at the possibility that with care and respect and gentle communication, we of the rational world might briefly enter the gate, and for a time, slake over aesthetic thirst in that other world. 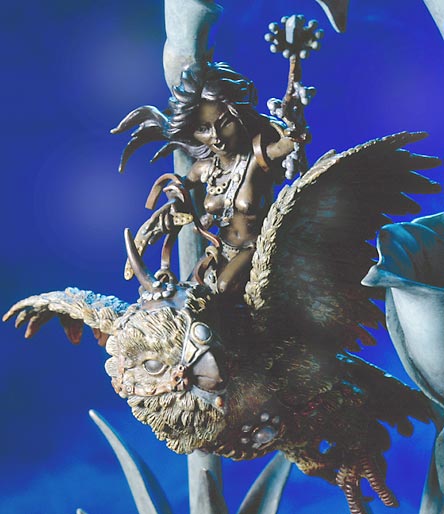 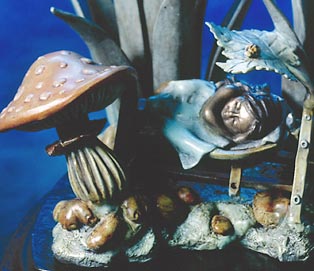