To a Plains Indian, his shield was his canvas. Stories, achievements, symbols of power or spirituality were recorded and shown on a shield. In Singer, John uses that medium in bronze to tell one of his favorite stories.

In the sculpture Singer, the beaded falcon comes to life, ripping the stitches from his right wing. On the left side the Shaman speaks to the falcon. The horizon passes through the center of the shield, separating the underworld from the overworld.

In the underworld on the left side, a pictograph rides a two headed wolf. Below the wolf runs a spirit elk as seen in a vision. In front of God's mouth is a Spirit Buffalo painted by Owl, a Cheyenne Medicine Man, while he was in prison in Ft. Marion, Florida. On the right side, a warrior rides chasing a buffalo. On the left side is a corn husk Sun Dance doll. The dots portray favors or qualities the dancer is asking of God. In front of the doll is an eagle wing bone spirit whistle used to summon the spirits. On the right side are two medicine bundles, a beaded medicine bird, and a flute. Feathers hang from the shield with bells attached, to indicate the spirit's presence. Various other symbols of power appear.

God's face is sculpted as if pressed against the fabric of the sky and the earth, all of creation.

At the request of several collectors John sculpted the backside of the shield so that, if desired, front and back can be bolted together on either side of a door as a functional door handle sculpture. 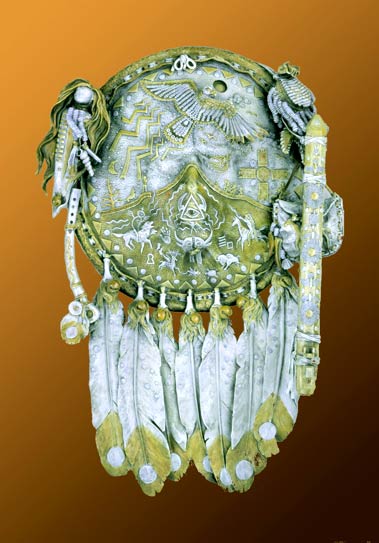 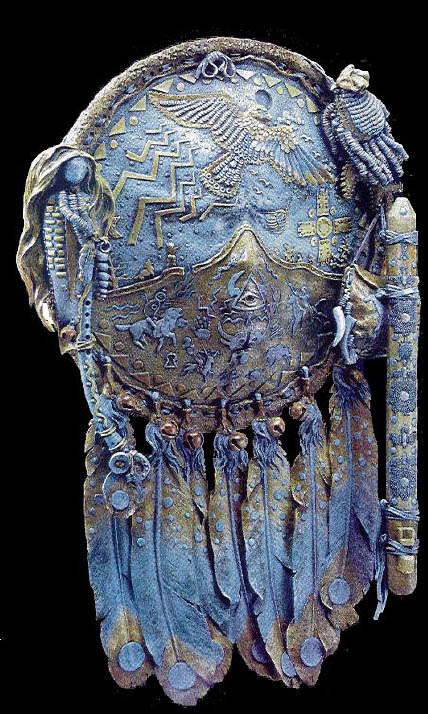 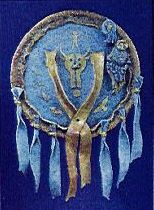