Catherine was the youngest of a very large family of 25 children. Her father, Giacomo di Benincasa, was a dyer; her mother, Lapa, the daughter of a local poet. They belonged to the lower middle-class faction of tradesmen and petty notaries known as “the Party of the Twelve”, which between one revolution and another ruled the Republic of Siena from 1355 to 1368.

From her earliest childhood Catherine began to see visions and to practice extreme austerities. At the age of seven she consecrated her virginity to Christ; in her sixteenth year she took the habit of the Dominican Tertiaries, and renewed the life of the anchorites of the desert in a little room in her father's house. After three years of celestial visitations and familiar conversation with Christ, she underwent the mystical experience known as the “spiritual espousals”, probably during the carnival of 1366. She now rejoined her family, began to tend the sick, especially those afflicted with the repulsive diseases such as the Black Plague, to serve the poor, and to labor for the conversion of sinners.

Though always suffering terrible physical pain, living for long intervals on practically no food except for the Blessed Sacrament, she was always radiantly happy and full of practical wisdom no less than the highest spiritual insight. All her contemporaries bear witness to her extraordinary personal charm, which prevailed over the continual persecution to which she was subjected even by the friars of her own order and by her sisters in religion. She began to gather disciples around her, both men and women, who formed a wonderful spiritual fellowship, united to her by the bonds of mystical love. During the summer of 1370 she received a series of special manifestations of Divine mysteries, which culminated in a prolonged trance, a kind of mystical death, in which she had a vision of Hell, Purgatory, and Heaven, and heard a Divine command to leave her cell and enter the public life of the world.

She began to dispatch letters to men and women in every condition of life, entered into correspondence with the princes and republics of Italy, was consulted by the papal legates about the affairs of the Church, and set herself to heal the wounds of her native land by staying the fury of civil war and the ravages of faction. She implored the pope, Gregory XI, to leave Avignon, to reform the clergy and the administration of the Papal States, and ardently threw herself into his design for a crusade, in the hopes of uniting the powers of Christendom against the infidels, and restoring peace to Italy by delivering her from the wandering companies of mercenary soldiers. While at Pisa, on the fourth Sunday of Lent, 1375, she received the Stigmata, although, at her special prayer, the marks did not appear outwardly in her body while she lived.

Mainly through the misgovernment of the papal officials, war broke out between Florence and the Holy See, and almost the whole of the Papal States rose in insurrection. Catherine had already been sent on a mission from the pope to secure the neutrality of Pisa and Lucca. In June 1376, she went to Avignon as ambassador of the Florentines, to make their peace; but, either through the bad faith of the republic or through a misunderstanding caused by the frequent changes in its government, she was unsuccessful. Nevertheless she made such a profound impression upon the mind of the pope, that, in spite of the opposition of the French king and almost the whole of the Sacred College, he returned to Rome (17 January, 1377). Catherine spent the greater part of 1377 in effecting a spiritual revival in the country districts subject to the Republic of Siena, and it was at this time that she miraculously learned to write, though she still seems to have chiefly relied upon her secretaries for her correspondence. Early in 1378 she was sent by Pope Gregory to Florence to make a fresh effort for peace. Unfortunately, through the factious conduct of her Florentine associates, she became involved in the internal politics of the city, and during a popular tumult (22 June) an attempt was made upon her life. She was bitterly disappointed at her escape, declaring that her sins had deprived her of the red rose of martyrdom. Nevertheless, during the disastrous revolution known as "the tumult of the Ciompi", she still remained at Florence or in its territory until, at the beginning of August, news reached the city that peace had been signed between the republic and the new pope. Catherine then instantly returned to Siena, where she passed a few months of comparative quiet, dictating her “Dialogue”, the book of her meditations and revelations.

Meanwhile the Great Schism had broken out in the Church. From the outset Catherine enthusiastically adhered to the Roman claimant, Urban VI, who in November 1378, summoned her to Rome. In the Eternal City she spent the rest of her life, working strenuously for the reformation of the Church, serving the destitute and afflicted, and dispatching eloquent letters in behalf of Urban to high and low in all directions. Her strength was rapidly being consumed; she besought her Divine Bridegroom to let her bear the punishment for all the sins of the world, and to receive the sacrifice of her body for the unity and renovation of the Church; at last it seemed to her that the Bark of Peter was laid upon her shoulders, and that it was crushing her to death with its weight. After a prolonged and mysterious agony of three months, endured by her with supreme exultation and delight, from Sexagesima Sunday until the Sunday before the Ascension, she died. Her last political work, accomplished practically from her deathbed, was the reconciliation of Pope Urban VI with the Roman Republic (1380).

Among Catherine's principal followers were Fra Raimondo delle Vigne, of Capua (d. 1399), her confessor and biographer, afterwards General of the Dominicans, and Stefano di Corrado Maconi (d. 1424), who had been one of her secretaries, and became Prior General of the Carthusians. Raimondo's book, the “Legend”, was finished in 1395. A second life of her, the “Supplement”, was written a few years later by another of her associates, Fra Tomaso Caffarini (d. 1434), who also composed the “Minor Legend”, which was translated into Italian by Stefano Maconi. Between 1411 and 1413 the depositions of the surviving witnesses of her life and work were collected at Venice, to form the famous “Process”. Catherine was canonized by Pius II in 1461. The emblems by which she is known in Christian art are the lily, olive branch and book, the crown of thorns, or sometimes a heart — referring to the legend of her having changed hearts with Christ. Her principal feast is on the 30th of April, but it is popularly celebrated in Siena on the Sunday following. The feast of her Espousals is kept on the Thursday of the carnival.

The works of St. Catherine of Siena rank among the classics of the Italian language, written in the beautiful Tuscan vernacular of the fourteenth century. Notwithstanding the existence of many excellent manuscripts, the printed editions present the text in a frequently mutilated and most unsatisfactory condition. Her writings consist of:

The “Dialogue” especially, which treats of the whole spiritual life of man in the form of a series of colloquies between the Eternal Father and the human soul (represented by Catherine herself), is the mystical counterpart in prose of Dante's “Divina Commedia”.

A smaller work in the dialogue form, the “Treatise on Consummate Perfection”, is also ascribed to her, but is probably spurious. It is impossible in a few words to give an adequate conception of the manifold character and contents of the “Letters”, which are the most complete expression of Catherine's many-sided personality. While those addressed to popes and sovereigns, rulers of republics and leaders of armies, are documents of priceless value to students of history, many of those written to private citizens, men and women in the cloister or in the world, are as fresh and illuminating, as wise and practical in their advice and guidance for the devout Catholic today as they were for those who sought her counsel while she lived. Others, again, lead the reader to mystical heights of contemplation, a rarefied atmosphere of sanctity in which only the few privileged spirits can hope to dwell. The keynote to Catherine's teaching is that man, whether in the cloister or in the world, must ever abide in the cell of self-knowledge, which is the stable in which the traveler through time to eternity must be born again.

Taken from the Catholic Encyclopedia. 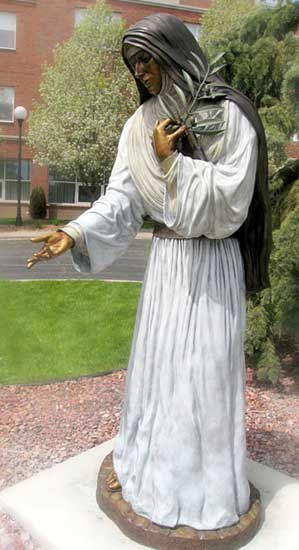 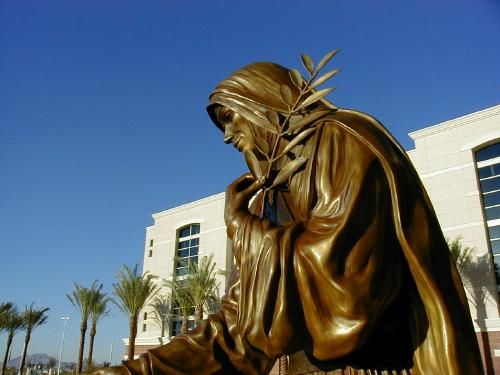 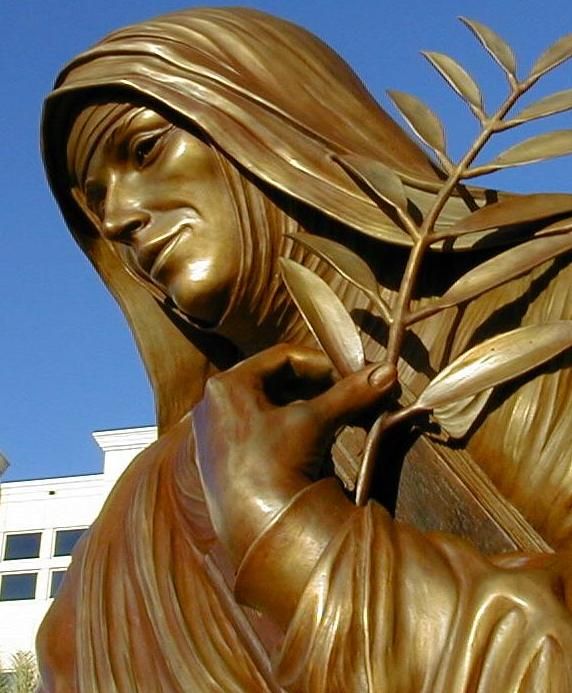 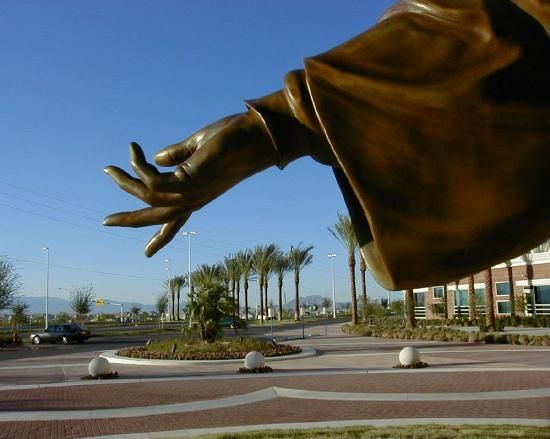 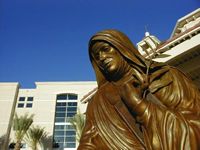 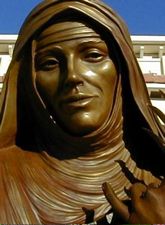 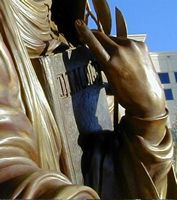