Born in Southern California, John M. Soderberg spent the first 18 years of his life in Central and Southeast Asia, and circled the world eight times before graduating high-school in Bangkok, Thailand. Gil Gillenwater has travelled much of his life, and among many other countries, extensively studied and explored in Tibet. Both, in their own way, have been fascinated by, and explored, the human experience. John became a member of Gil’s Rancho Feliz Charitable Foundation in its early days, and both have worked together since 1988 on numerous humanitarian projects and charitable efforts. After Gil’s latest immersion in Tibetan culture and sacred landscape, he told John of his experiences and realizations, and invited him to sculpt the Tibetan goddess Vajrayogini.

John had been moved for some time to work in that direction, and Gil formally commissioned him to do the sculpture. They worked together for three years designing this piece, and all of the elements involved, as John sculpted her. In the truest sense of the word, the bronze Vajrayogini evolved. This evolution began in the early lives of John and Gil, in their explorations, interests and growth, and continued through their design partnership. Following, in their own words, is an introduction to this evolution of the bronze Tibetan goddess Vajrayogini.

John M. Soderberg: "I was six or seven years old when the Dalai Lama came to Kashmir. He came to see the movie about the holy-man Moses, with Charlton Heston. I was living at that time with my family on a carved wooden houseboat on Lake Dal. We also went to the movie, and I still vividly remember the Dalai Lama’s face as he smiled at me, in the gardens outside the theater.

In the 1940s, my father had been commissioned by the king of Afghanistan to build the first engineering school in the country. The first five years of my life were spent there, where I sculpted in mud and clay, and began painting in oils. We then moved to India for six years, living mostly in New Delhi, but spending much of the time travelling and exploring from Sri Lanka to Madras, Srinigar, Nepal and Assam. International attention was on India then, and I met President Eisenhower, Prime Minister Nikita Krushchev, Prince Phillip, others, and had tea in the palace with Prime Minister Jawaharlal Nehru when I was seven years old.

The art of India marked me deeply. From the carvings on the ancient forgotten temples my brothers and I found and explored in the jungles and forests, to the intricate sculpture in the bazaars, and the storytelling paintings of the Ramayana, I discovered my passion. Every Sunday, in New Delhi, Tibetan gypsies would show up in front of our home and spread out a blanket on the driveway. From bulging bags, they would pull out pots, jewelry, ceremonial knives, and sculptures in jade, wood, and silver. They laid everything out in rows on the blanket. I would spend hours holding and studying the art.

When I was eight years old, my family and I rode on horseback from Northern India up to the foothills of the Himalayas, and the glaciers. We rode for several weeks, sleeping in small dark bungalows in mountain meadows. We caught our horses after breakfast around a fire in the morning, and rode on. The beauty was immense. Two months later, I stood alone inside the Taj Mahal, next to her tomb, on a full moon at midnight, looking through the filigreed marble walls at the moonlight reflecting from the lily ponds.

When I was 11, we moved to Thailand. At 12, I began studying teakwood carving with the leading master in the country, a Buddhist monk. Every weekend, we would set up in old-town Bangkok near the 90 feet long reclining Buddha, and carve all day on Buddhist angels, dragons, etc. The master would speak as we worked of his childhood, of Buddhism, and of art. My high school was the International School of Bangkok. We had over 90 nationalities represented. For a time, my girlfriend was a Buddhist Cambodian.

I studied various martial arts from age 13 or so, and spent much time in various dojos around Bangkok. I studied with Koreans, Japanese, Americans, and Thais, and made my Black belt by age 17. It was an important time in my development, as an artist and as a student of humanity. From as early as I can remember, I have been fascinated by people, and have been drawn to philosophy and psychology. I have been most led to those essential human elements that serve to unify people over the superficial barriers which too often separate them. The evolution of my art has been to document and explore the essence of humanity, and this led me to service-work in the early 1970s.

After high school, I flew to America in the late 60s to attend university in Washington State. Due to culture shock and the unrest of the late 60s , I dropped out, painted for a year on the street in Berkeley in the middle of the People’s Park riots, then enlisted in the Marine Corps. I taught martial arts in the military, and became involved with service-work, mainly stress and drug-abuse counseling. After my Honorable Discharge in 1973 I worked as a tool and die maker-machinist, painted and made jewelry at night, and expanded my volunteerism. I became most involved with charitable groups, which focused on women and children in need.

In 1976 I committed my art-life to bronze sculpture, and have worked exclusively in that medium since. I have continued to expand my service-work involvement, and have used my sculpture to benefit numerous organizations including Amnesty International, Rancho Feliz, Free the Slaves organization, one of the Paul Newman Hole in the Wall Gang camps for seriously ill children, domestic abuse shelters, Big Brothers, Big Sisters, the Advancement of Women for Northern Arizona University, community service clubs, and other causes. In 1998 I received my Ph.D. in Humane Letters from Northern Arizona University, and a year later was Knighted by a Swedish Count for service-work, and for art achievement.

I have sculpted numerous historically influential figures including Christ, Moses, Merlin, Norman Vincent Peale, Billy Graham, Steven Biko, Poseidon, Archbishop Fulton Sheen, St. Catherine of Siena, Sacajawea, Gil Gillenwater, various corporate founders, and others. I have sculpted several Asian-theme pieces over the years, but for the last decade have felt a strong pull to sculpturally explore more deeply the influences of my childhood. I have begun this process with the bronze "Vajrayogini." It feels very good to come home."

Gil Gillenwater: "I am a life-long resident of Scottsdale, Arizona. I am a yoga and meditation practitioner, an outdoorsman, a traveler and a black belt in Kenpo karate. In addition to this, or should I say because of this, I am also a philanthropist.

My interest in Buddhism and Eastern thought came directly through my fascination with the human mind. As an existentialist, I have always been intrigued with consciousness and our unique ability to create realities through the study and power of our minds.

My quest led me from positive thinking, to hypnotism, to Hinduism and eventually to Buddhist meditation master Chögyam Trungpa and his "Shambhala, the Sacred Path of the Warrior". (Little did I know how prophetic the words "Shambhala" and "Warrior" would be in my life.) Discovering "service to others" as an ego-diminishing, fast-track to awareness, in 1987 I founded the Rancho Feliz Charitable Foundation, Inc. (www.ranchofeliz.com). I have since devoted a major portion of my life to service. This is my chosen path to awareness. In 1993 I took my Bodhisattva vows from the Dalai Lama. In 2006 I founded the Guardian Warrior Foundation, Inc., a self-funded charity established to support Rancho Feliz and to promote its concepts on a global basis.

In 1999, I was a recipient of the Hon Kachina Award, Arizona’s highest honor for volunteerism. In 2000, I was one of five members throughout the United States chosen to receive the National Association of Realtors, "Good Neighbor Award", likewise honoring volunteerism.

My interest in Buddhism led me to Tibet in 1994. Obtaining some of the first permits to enter the forbidden Pemako region, my brother and I smuggled a 12-foot paddle raft into southeastern Tibet. Here, with two companions, we made a "first descent" attempt down the world’s highest, remotest and wildest river, the Yarlung TsangPo. This was my first of three ventures into the revered Beyul Pemako region – the "Hidden Land of the Blossoming Lotus", the Shambhala of Tibet. It was here that I was introduced to the female Buddhist meditational deity -- Vajrayogini.

Vajrayogini is represented geographically spread out over the Pemako region (as further explained in the description). Her practice is especially associated with the use of sexual energy to obtain enlightenment. As a man, I have always been fascinated by the female energy and the intuitive and compassionate energies it has to offer. I was hooked.

Returning to Pemako in 1995 and 1997, we undertook month-long, leach-infested and extremely arduous pilgrimages/expeditions to Vajrayogini’s various terrestrial chakras. It was in 1995, during a particularly brutal portion of our trek that she appeared to me in a vision. However, instead of seeing her in the classic upright "Warrior Posture", I saw her in the reclining posture of the Buddha. Also, instead of the stiff legged, rigid demeanor of a store-front mannequin, she was soft and supple and invitingly gorgeous. (Historically, Vajrayogini, as a meditational deity, has been sculpted, painted and described by monks – men of limited knowledge of the female body.) The Vajrayogini I saw exuded power through her sexuality. The vision was stamped indelibly.

In 1997, my brother and I located Pemako’s long-sought "Lost Falls of the Brahmaputra" and were subsequently arrested by the Communist Chinese. However, that’s a different story and if you are interested you can learn more about it at: (www.hiddenfalls.org).

I have returned to the Himalayas three additional times visiting Vajrayogini’s holy locations in Nepal, Ladakh and Mt. Kailash of Tibet. In 2007, I completed the holy circumambulation of the base of Mt. Kailash, then climbed to the world’s highest Buddhist shrine, the 20,000 ft. high Cave of 13 Chortens, and completed the inner kora. I experienced the Cave of Miracles, and underwent the sky-burial death ceremony at 20,000 feet on the sacred mountain.

It has long been my dream to find a way to convey my experiences and understandings in a unique and meaningful way. My artist friend and long-time fellow Rancho Feliz "Guardian Warrior", John Soderberg, has helped me do just that.

I worked with John for three years creating the "Reclining Vajrayogini" bronze. The piece is rich in symbolism and I know of no other sculptor who could have captured the essence of this feminine deity as did John. There is not a doubt in my mind that John was divinely inspired and guided in this creation. The Vajrayogini you see here is the self-same goddess who materialized before me in waterfall mists of the Hidden Lands.

It’s important to note that the many Buddhist concepts symbolized in this sculpture exist independent of Vajrayogini. Vajrayogini’s function is to rouse the kundalini energies in her practitioners. Once brought to the fore, these sexual energies can be harnessed as the force to propel us beyond our instinctual traps such as grasping, greed, hatred, self-centeredness, etc. to achieve spiritual perfection.

I chose Vajrayogini because I believe the genetic drive to reproduce is the strongest of all human instincts. Accordingly, as instinct driven as I am why not choose rocket fuel to propel me on my path to enlightenment! 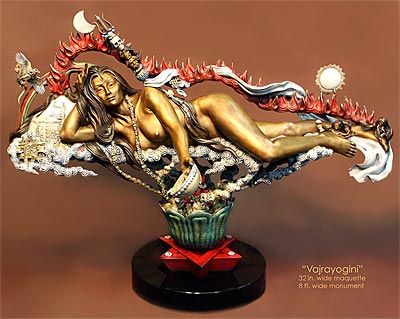 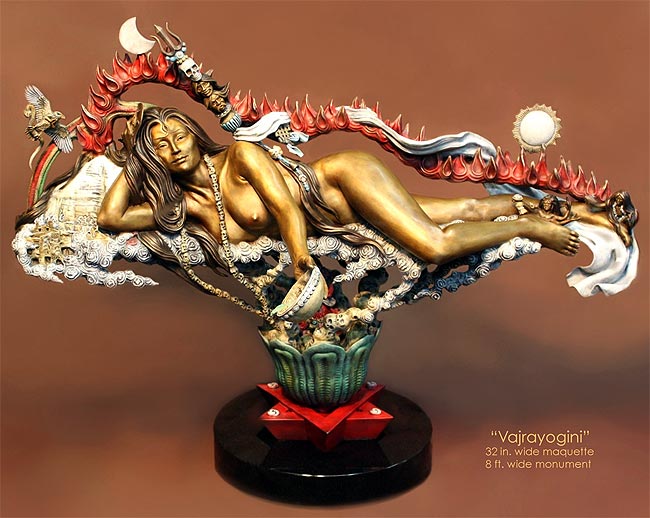 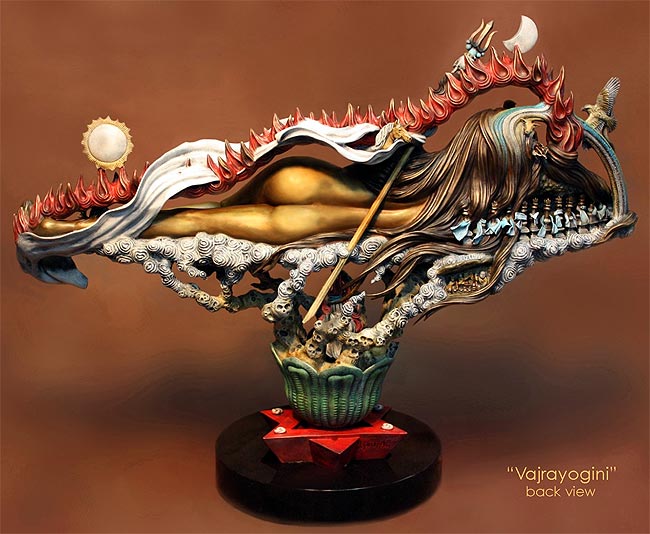