"To me, art is not a luxury, but is a basic human necessity. Art can, and should, remind us of our humanity, and that of others, and enhance the quality of our lives. From the earliest artists, Stone Age storytellers around a fire in a cave, to the painters and sculptors and architects of today, art has pervaded and shaped our societies. To me, an artist is not primarily a creator, but is rather a conduit—absorbing, translating, and conveying messages of value to others, living or centuries yet to be born."

John Soderberg circled the world eight times and visited more than 40 countries before graduating high school in Bangkok, Thailand. His father Richard had been commissioned in 1947 by the King of Afghanistan to build the first engineering school in that country. Born in 1950, John spent his first four years there, after which the family moved to India for five years, and then Thailand for eight years.

The Soderberg family was required to circle the world every two years. Loving art, they spent much time in Europe and Asia, visiting the world's great art in museums, galleries, cathedrals and temples. In Rome, when John was five, his mother Betty held him up so he could touch the foot of Michaelangelo's Moses. He experienced his first epiphany, and was amazed at the ability of sculpture to move people, centuries after the artist was gone. He dedicated himself to art, started painting in oils at age five, and studied teakwood carving with Thailand's leading master, a Buddhist monk, from age 12.

After high school in Thailand, John came to America for college, in Washington State. Due to extreme culture shock, he dropped out and painted on the street in Berkely, California, in the middle of the riots of the late 60s. In 1970, for a life-change, he enlisted in the U.S. Marine Corps for three years. After receiving his Honorable Discharge, he worked as a machinist days and painted and made jewelry nights. Among others works, he completed a commission for a bracelet for Elvis Presley, then moved his family to Flagstaff, Arizona, to work in a bronze foundry to learn the art and craft of sculpture.

After numerous and interesting starving artist years, John began selling his art professionally, and served as Artist in Residence at Northern Arizona University. He later received his Ph.D. in Humane Letters from that institution.

He has since completed monumental bronze commissions for private parties, corporations, churches, and organizations across the country, including Amnesty International, the Crystal Cathedral, the Sedona Synagogue, Rancho Feliz Charitable Group, Free The Slaves organization, Pepsico Corporation, Texas Winery Products, Jacmar Foods, the Honeywell Foundation, Wilden Pump and Engineering, and others. 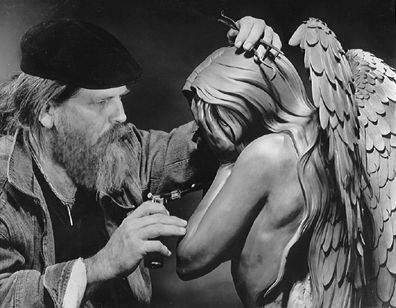 John became involved with service-work in the military, and has since donated a large portion of his time and work to others, focusing on children and women in need. He has worked with domestic abuse shelters, Amnesty International, Free The Slaves, Rancho Feliz, Big brothers, Big Sisters, and many other groups and causes. In the late 90s, John was knighted by Ulf Hamilton, a Swedish Count, for his service.

John lives and works in the Sedona, Arizona area. His daughters, Heather and Misty, both noted professional sculptors, work with him on all of his monuments. They each began spontaneously sculpting at age one, turned professional at age two, (at their own choice,) and were featured on Paul Harvey News, People Magazine, National Geographic World, That's Incredible T.V., and other media, and showed their work in galleries in Scottsdale and Houston, all before eight years of age, and all before their father achieved any professional success, whatever. 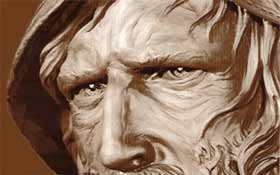